Since Alan Bilzerian launched his business in 1967, his shop has been leading the way amongst US and European retailers in stocking the collections of such groundbreaking designers as Rick Owens, Jil Sander, and Ann Demeulemeester. Alan and Bê are known to recognize young talent early in their careers as well, having purchased Alexander McQueen's premiere collection and John Galliano’s graduate pieces to sell in their Boston area shops, which have since become a primary destination for individuals searching for high quality inspiration. 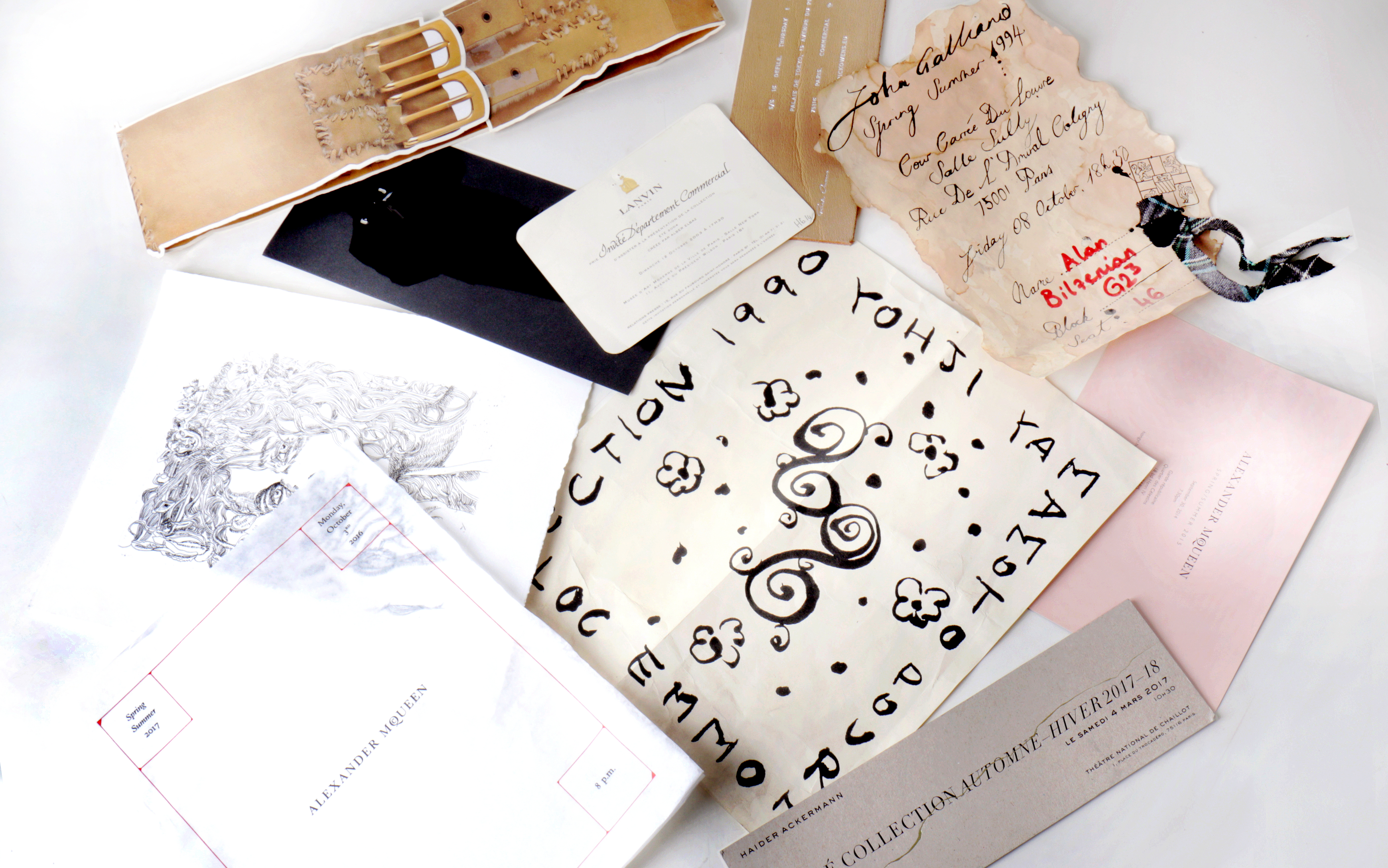 Alan and Bê Bilzerian were the first US buyers to introduce Issey Miyake, Rei Kawakubo, and Yohji Yamamoto, Japan’s prominent “Big 3“ designers, to a Western audience. Here’s "The Beginnings", a discussion with Alan Bilzerian and Bê Khanh Bilzerian.

G: When you first started your business was it primarily European designers?

Alan: It was everything. It started out as an American concept of unusual findings. I remember a pinned suit on the wall of walrus satin for costumes. Then it quickly transformed into an English emotion, then towards Europe and then Japan. We were bringing garments back on the planes in our hands.

G: You and Bê brought over Yohji Yamamoto and Comme des Garçons collections on the plane to bring back to Boston?

Alan: The first designer we met was actually Issey Miyake, and that was in 1974 in Paris, Issey did his first show in the basement of the restaurant called La Coupole. It was very small and crowded about 40-50 people. All I could remember was orange, fuschia, naturally black, but everything was so vibrant and impact oriented. The mood was exactly what you could transpire for the next 10 years. It was the most uplifting and the most separated idea in fashion and in clothing that had happened because it came from a completely different culture. We knew of the temperament and history of Europe but had to discover what Japan was about.

G: Was it word of mouth discovering them?

Bê: Issey Miyake’s director who was at that time was Mr.Tada, invited me to Tokyo to see their organization, and to go to the hot springs in Hakone. I was very excited to go to Tokyo for the first time. I had the feeling that strong energy was coming out of there. The first night I arrived in Japan a friend who worked for the fashion magazine Popeye asked me to come for dinner he had organized for me to meet a designer. That is when I met Rei Kawakubo for the first time. She invited me to come to her showroom to see her work. It was a great experience! I asked her if I could buy anything for our store in Boston. She said write everything you want down and we will ship it! All of the clothes had new proportions and shape. Very exciting.

G: So you bought from Rei when she was still in Japan?

Bê: Yes. At the end of the meeting she asked me if it was a good idea for her to present her collection in Paris. I said absolutely. She had already had her thoughts about presenting in Paris the next season and wanted names of stores she should invite. So I gave her a list of potential buyers. And that was it. 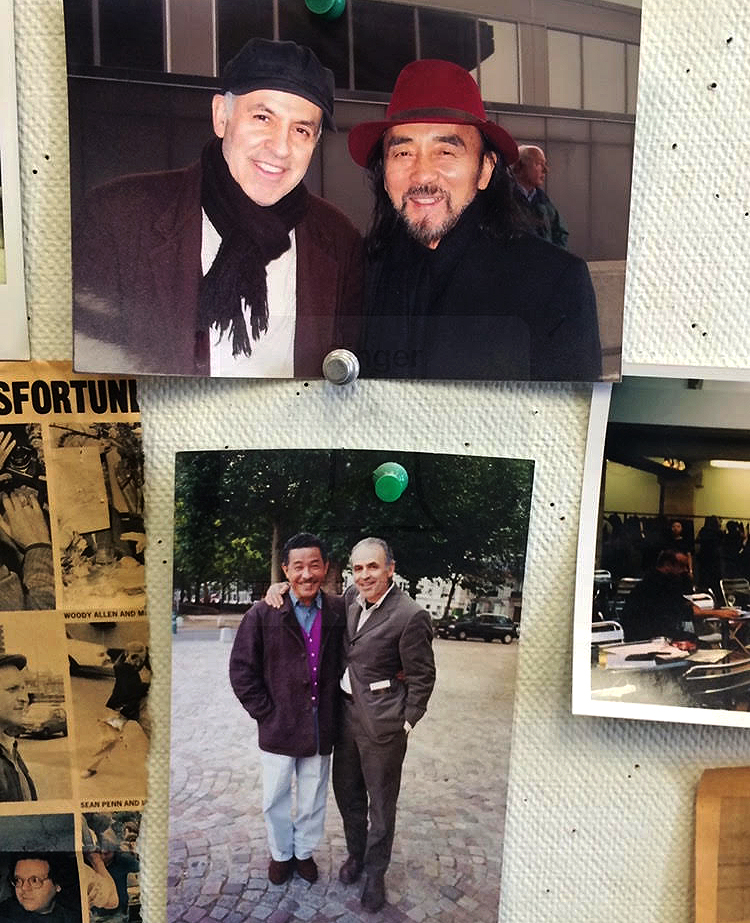 
G: You discovered Yohji after?

Bê: After meeting Rei, for the next couple of days I was running around looking for more because I knew something was happening in Japan. I wanted to discover more of Tokyo. Then the director of Isetan, who I met in Paris, invited me to visit the store. He took me to all of the different floors and explained to me the concept of the store. It is in the Isetan store that I found an interesting pair of pants. The label only said “Y’s” and nothing else. In Japan it’s impossible to find an address I couldn’t even google anything! After three days I was lucky to finally got an address that could be the right one. A taxi took me to my destination in front of an entrance with a shōji door. An older lady welcomed me that was Yohji’s mother, Mrs. Yamamoto. She told me to sit down and wait. At that point I still didn’t know if I was at the Y’s company. After half an hour a gentleman comes out and apologizes for the wait. It was Mr. Hayashi the director of Yohji Yamamoto. I explained to him I had came from Boston to Tokyo and had found a pair of pants from the Isetan store and I was wondering if this was the Y’s company. I was very excited to find out I was in the right place and I asked if I could see the collection for my store. He invited me into the office and showed me all of the samples of the collection and told me to choose whatever I liked and they will pack and ship it. Mr.Hayashi said that the designer is coming to meet me. We talked about Tokyo, Boston, fashion, at that point Mr. Hayashi said that I could not bring back the merchandise with me because it needed a day to fill out the paperwork for export. Yohji suggested that I change my ticket and to call Alan in Boston to let him know the change in my schedule.


“Alan I found this company I’m in love with but I have to stay an extra day.”
He immediately replies with,

Yohji was laughing so much and said, “I want to meet your husband. I like him.”


G: When did Alan meet Yohji?

Bê: Three months after my encounter with Yohji in Tokyo, it was Men’s Fashion Week in Paris. In Paris, Alan went to the little atelier Yohji had to meet Mr. Hayashi and Yohji.
The minute Alan walked into the room, without any context, both of them said,
“That must be Bê’s husband.”

And that was it. Since that moment we have been best friends with Yohji. 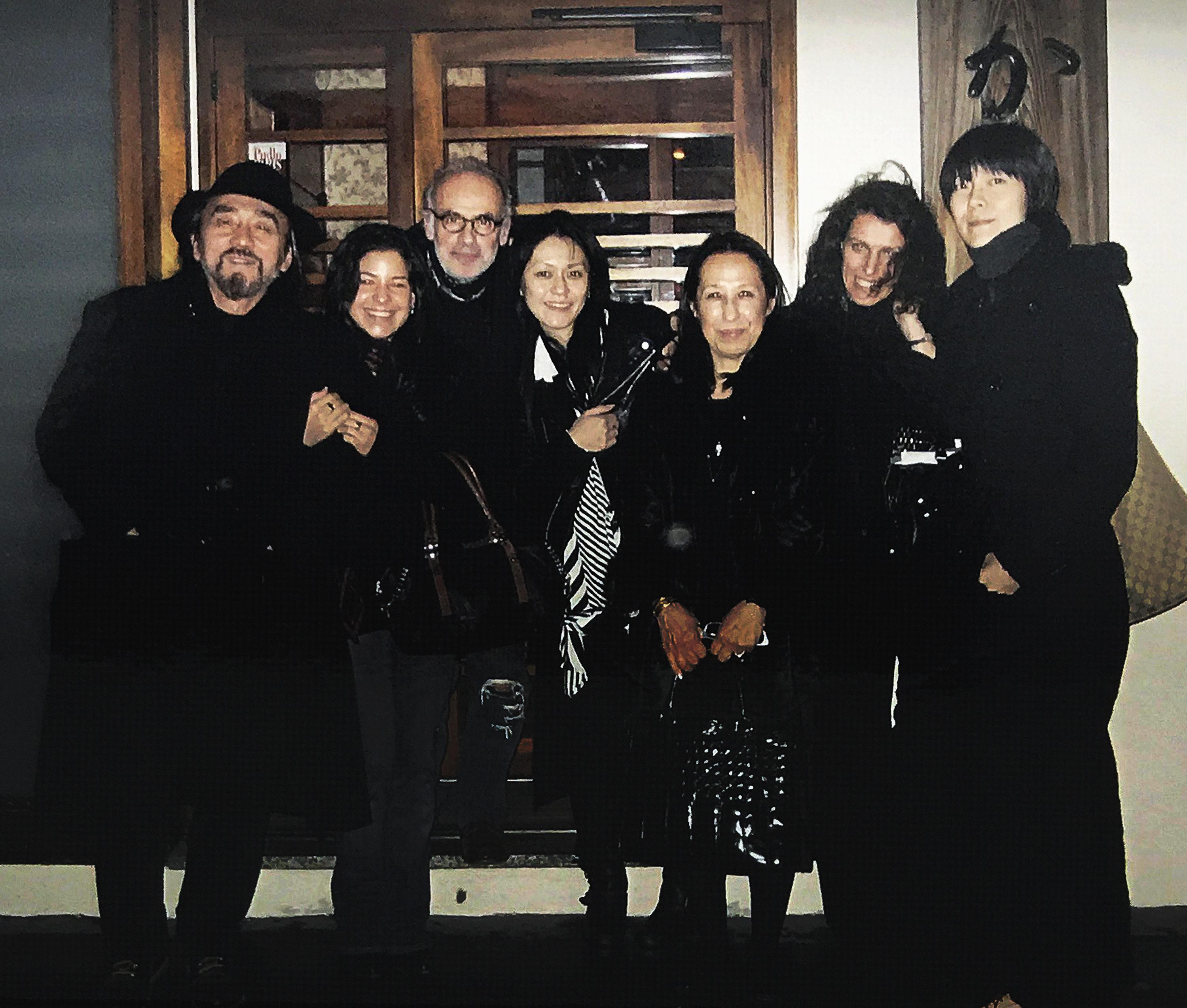 G: What did you think about the Japanese and their entrance into Western fashion?

Alan: The Japanese brought the wave together and the press completely hated them. They didn’t have have budgets to spend on advertising and it was such a political disturbance with Fairchild Fashion Media and Womens Wear Daily. “Well, where’s the money for the advertising? We’re going to make you big”. Rei and Yohji didn’t have the money so they started getting trashed by the press. Plus the clothing they were creating was starting to get more aggressive. Rei and Yohji offered one color, black, for the whole collection, season after season and it was very against the mainstream of fashion at that time. All three of the Japanese designers, Issey, Rei and Yohji, were very strong in their own identity. It was a new direction, a new palette, and new technology. Everything that people wanted was new creativity with quality of fabric. The pants were made as if they were from the 40s, everything matched with cotton linings and pockets. The stitches were tighter. The silhouettes were not sacrificed and you could wear garments everyday. It was one of the central points of how all three could contend in any market. Whatever you input into the make you get in return from the longevity.

And they still do it. 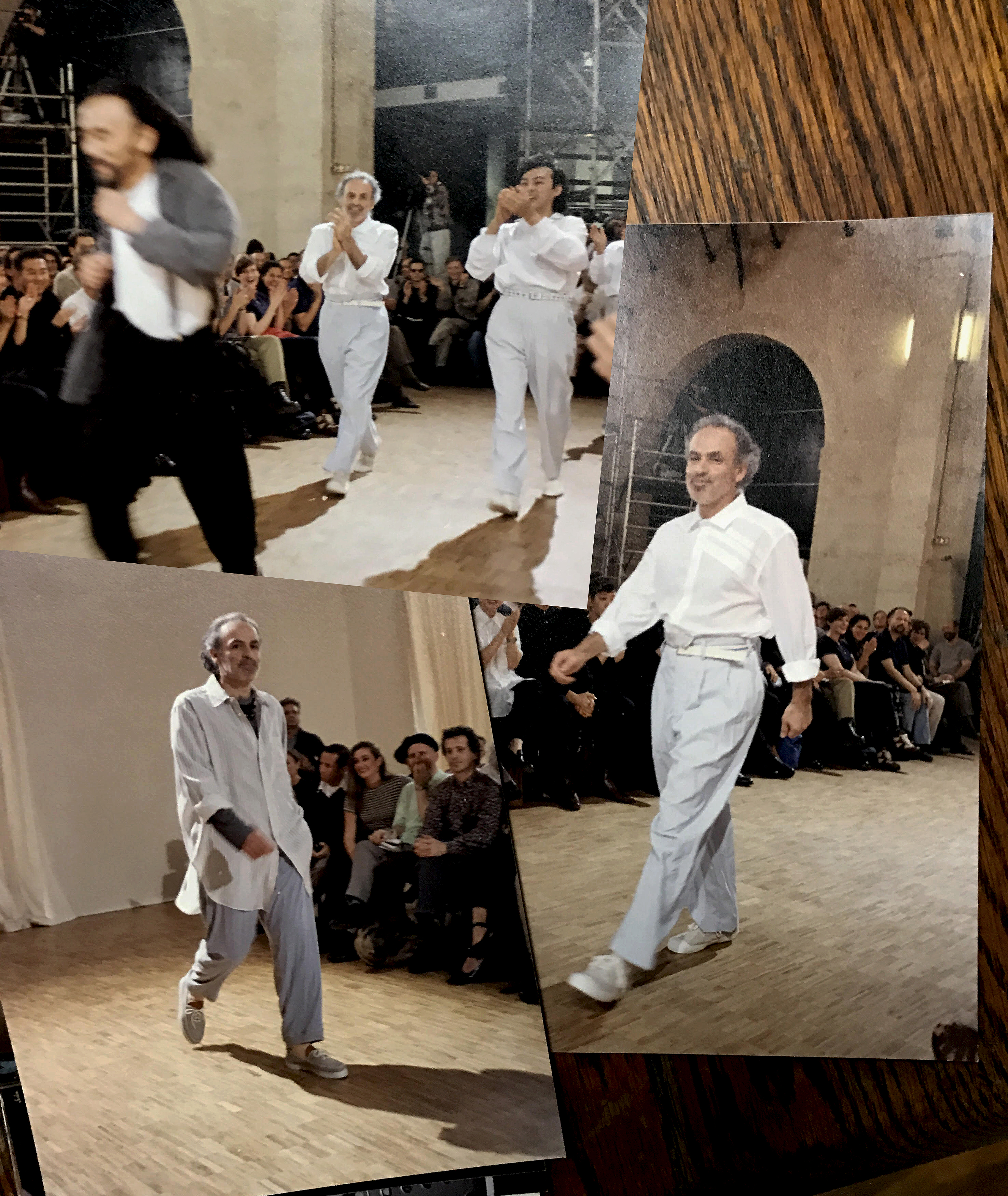 Image: Alan Bilzerian on the runway for Yohji Yamamoto collection

G: How long did it take for America to catch on?

Alan: The Americans in 1980, when we introduced Yohji’s secondary line Y’s, for them we couldn’t even get them out of the boxes quick enough. The news media really helped, we were on TV a lot at the time showing the latest fashions. But the magazines in particular didn’t like that they weren’t getting the money from the advertising. They came to us directly and told us these designers were taking a stand and were so different from the repetition of everyone else. Headlines called them “Baglady Fashion” and “Hiroshima chic”. It was ridiculous! Now look… which designer is at The Met?

G: With the recent exhibition on Rei Kawakubo’s work at The Metropolitan Museum of Art in New York City how did you feel about they way they portrayed her work?

Bê: My only objection about the whole show was that she presented only one side of her. She showed only the most elaborate and intriguing pieces. It was almost like it was all of her exercises when it came to experimenting with materials and form. All the expressions. She was showing all of her fantasies. She did not show the public her real clothes, and they would have never known her real creativity when it came to her impact in the 80s. She brought fashion to a completely different page when it came to building a garment. Her evolution was so important and strong that now it’s simply a revival of young designers calling themselves designers when they’re simply graphic people that are art directing. They’re not inventing anything. That knowledge of what she did was so important and the beautiful red, flowery, and elaborate dresses are just one side to what Rei was capable of. The core of the creativity of Rei was how she was cutting the jacket and how she was able to make a skirt from a single piece of fabric into the illusion of a triangle. I remember the first collection had a “lace sweater” full of holes like moths had eaten it. I remember WWD wrote a headline, “Sayonara Japanese Fashion”. It was so insulting. Now all of the new collections have holes everywhere! This is what the show failed to explain and I think it’s very important for all of the students who go to this show to know. The exhibition was gorgeous and a pleasure to the eye but I just wish we could learn more about the influence of Rei Kawakubo.